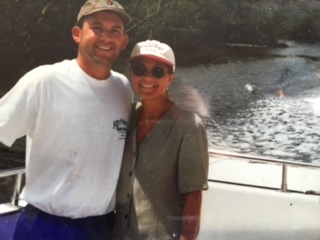 Happy Valentine’s Day and Happy Anniversary to my beautiful and long-suffering wife of 24 years. Sandra is the best thing about my life and officially now we have been married half my life. We started dating when I was 16 so I’ve known her for 2/3rds of my life. Bless her heart. She’s still trying to help me straighten out the first third.

To celebrate today I am posting a piece that wrote over 10 years ago for a Valentine’s Day contest sponsored by a local Monroe, NC AM radio station. Behold, ladies and gentlemen, the winning entry.

It’s called the The Inconsiderable Alternative.

It was a Valentine’s Day evening wedding. My bride was beautiful, the moment was tender and the saxophonist blew out Amazing Grace with creamy smooth precision. The night was young, so were we and it belonged to us. To protect the innocent, I’ll skip the details of the wedding night and fast forward to the next day. Because the next night, well… things didn’t proceed with such creamy smoothness.

We woke up in Charlotte. Our honeymoon destination was Beech Mountain, North Carolina, but since the wedding night went long we decided to sleep in Charlotte and drive to the mountains the next day. The next day kind of dragged on. We visited with family, looked at home videos of the wedding ceremony, opened presents(looking for cash gifts) and just hung around. So by the time we arrived in Beech Mountain on a Saturday night, it was late. It was dark. The real estate office was closed. I looked in the late arrival box for our package with the keys and directions to the really nice mountaintop cabin that I rented. The package was not in the right spot. Not a good omen. I looked around in the box and it contained only one other package. Our names were not on it. Another not so good omen. I’m not a real smart boy, but I do possess some deductive reasoning skills. Either the real estate company failed to put my package in the box or drats…I didn’t want to consider the alternative. Or maybe I reasoned that the wrong name accidentally was written on the envelope and that the package in the box really was intended for us. I went that route and followed the directions given to the house. A half hour and a few wrong turns later(let me just admit right now, cause I am man enough to do so, that being lost in a strange town on a dark night is a little creepy) we found the place. A shoddy unit in a set of run down condos. Definitely not what my hard earned credit card paid for. I called the emergency number for the real estate company. I was assured that a package with my name on it, yes, Brady, they said, was placed in the late arrival box. Uh-oh…the inconsiderable alternative. Someone else took our package and was in our mountain top cabin. Illiterate folks, I reckoned.

The emergency contact person and a sheriff’s deputy met us at the real estate office. My first full day of married life and the long arm of the law was already involved in my business. Another not so good omen. Well, we caravanned out to our really nice mountain top cabin and yeah, you guessed it. Party central. The creepy feeling was returning. I can’t remember how many people the deputy booted out. I can only recall the sick, paranoid feeling I had about these crazed, angry psychotics returning later in the night and butchering us with a pick ax. I mean, why not? It happens all the time. After all, they drank the wine and ate the chocolates that I special ordered and had delivered in advance to the cabin. They used our firewood and their cigarette smoke killed the beautiful dozen long stem roses that came along with the wine and chocolates. Was I supposed to believe that a band of illiterates vacationed together and couldn’t read my name on the package; that they thought the roses, wine and chocolates were comped; and that they thought all of these things came with the $45.00 dollars a night they paid for the dumpy condo unit? I don’t think so. I had some renegade lunatics on my hands, I just knew it. And I knew that they were coming back. And I was outnumbered. My nerves were raw as sushi. To make things worse, this really nice mountaintop cabin had a cellar. And the cellar had a window that could be broken and entered into. Come on. You know how scary cellars are. Every decent horror flick has at least one cellar scene. Remember Home Alone? Well, to be sure, I locked the cellar door and for good measure I moved a piece of heavy furniture in front of it. Then I looked around for a weapon. I’ve never exercised my right to bear arms and doggone it, I was feeling a little regretful over that issue at the moment. But I did find a weapon of almost equal caliber. A two iron. Never been good with one on the golf course, and given a chance on this night, I was sure to leave a divot. I can’t remember where Sandra slept that night, but you can bet that the golf club slept right by my side. Yeah, it is true. I was a husband for just a little over 24 hours by that point and I wasn’t feeling real manly. Think scared little boy. Getting lucky that night would mean a quite night with no returning psychos. Well, the night passed without incident and no, I didn’t stay awake. I was frightened and on edge enough to do so, but ask anyone who knows me and they will tell you that it is a physical and biological impossibility for me to be in a horizontal position for longer that 15 minutes and stay awake. So true.

The rest of the honeymoon did go smoothly and magical. It snowed. We watched Lonesome Dove by the fire in the huge stone fireplace. We hiked. We…well, for the sake of protecting the innocent again…