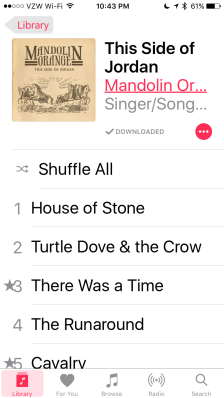 As I approach 50 there are less than a handful of albums that have left an enduring mark on me.

The first one (and I admit this without shame) was Back In Black by AC/DC. I still remember where I was when I heard it the first time. I was playing basketball in the neighborhood when a guy had it blaring from his house. Evidently, his parents weren’t home. I was 13 years old. Now, 37 years later, I have the album on my iPhone. Lord, forgive me.

Then came John Cougar Mellancamp’s American Fool a couple of years later. Somewhere in my house is a cassette tape of Sandra and I singing Jack and Diane recorded at Carowinds when we were 16 and 15 years old.

Fast forward to 2002. I enjoyed plenty of great music in between. Telegraph Road by Dire Straits lulled me to sleep many nights as a struggling teenager. The Eagles, Clapton, Buffet, Raitt, Seger, Skynard, all good stuff. But 2002 was the next time an entire album captivated me. Come Away With Me, Norah Jones’ first album won over a lot of people (I’m listening to it now). Her next release, Feels Like Home was pretty good, too.

Then in 2005, Jack Johnson released In Between Dreams and it has become my standard beach and poolside music replacing Jimmy Buffet’s Songs You Know By Heart (or anytime I needed to mentally take a vacation).  Although I’ll never forget listening to Buffet on my waterproof Sony cassette player while riding a jet ski off the coast of Marco Island in 1996.

It took almost 12 years and I suppose the jury is out if this next album will stand the test of time, but considering I’ve logged probably 100 listening hours in 30 days, I’d say it will pass the test. That album is This Side of Jordan by Mandolin Orange. It puts me to sleep almost every night. The group is from Chapel Hill. Bonus points.

So kids when you put me in a nursing home one day, please make sure I have my music with me.